During my family history research project, I have investigated the lives and movements of over 100 of my direct ancestors in New South Wales. Surprisingly the geographic range that these families have covered in the past 190 years is not overly extensive. All of my ancestors in Australia began their new lives after arriving in Sydney and generally moved only a few short hours (in today’s context) to the south-west. Most ended up in the Gunning and Dalton region. After doing a quick ‘head-count’ and audit of burial locations of my direct ancestors I was able to produce the following heat-map which clearly shows the high distribution of my ancestors who are buried in the region, particularly in Dalton, New South Wales. 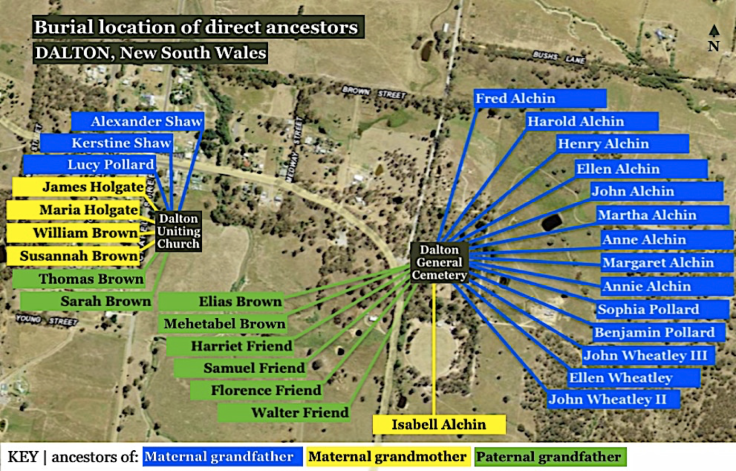 Dalton has two cemeteries, the Dalton General Cemetery to the east of town, and a small cemetery at the Uniting Church. The cemetery at the rear of the Dalton Uniting Church has, what one might consider to be the Dalton pioneers cemetery, containing many significant families from the regions earliest days of settlement. Within this cemetery are nine direct ancestors from all but my paternal grandmother family lines (as represented in the image above). The Uniting Church cemetery (formally the Methodist Church cemetery) only has twenty-nine known or suspected burials.

Pulling back a little further, most of my remaining ancestors can be found just a short distance away at Gunning (10km), Bevendale (21km), Yass (27km), Rye Park (34km), Crookwell (38km) and Goulburn (50km). When it comes to my ancestors in Australia, it sometimes seems that if one wanted to throw a towel over them all, you need only drop one anywhere in the Upper Lachlan Shire. Doing so would properly cover a significant portion of my ancestor’s geographical footprint.