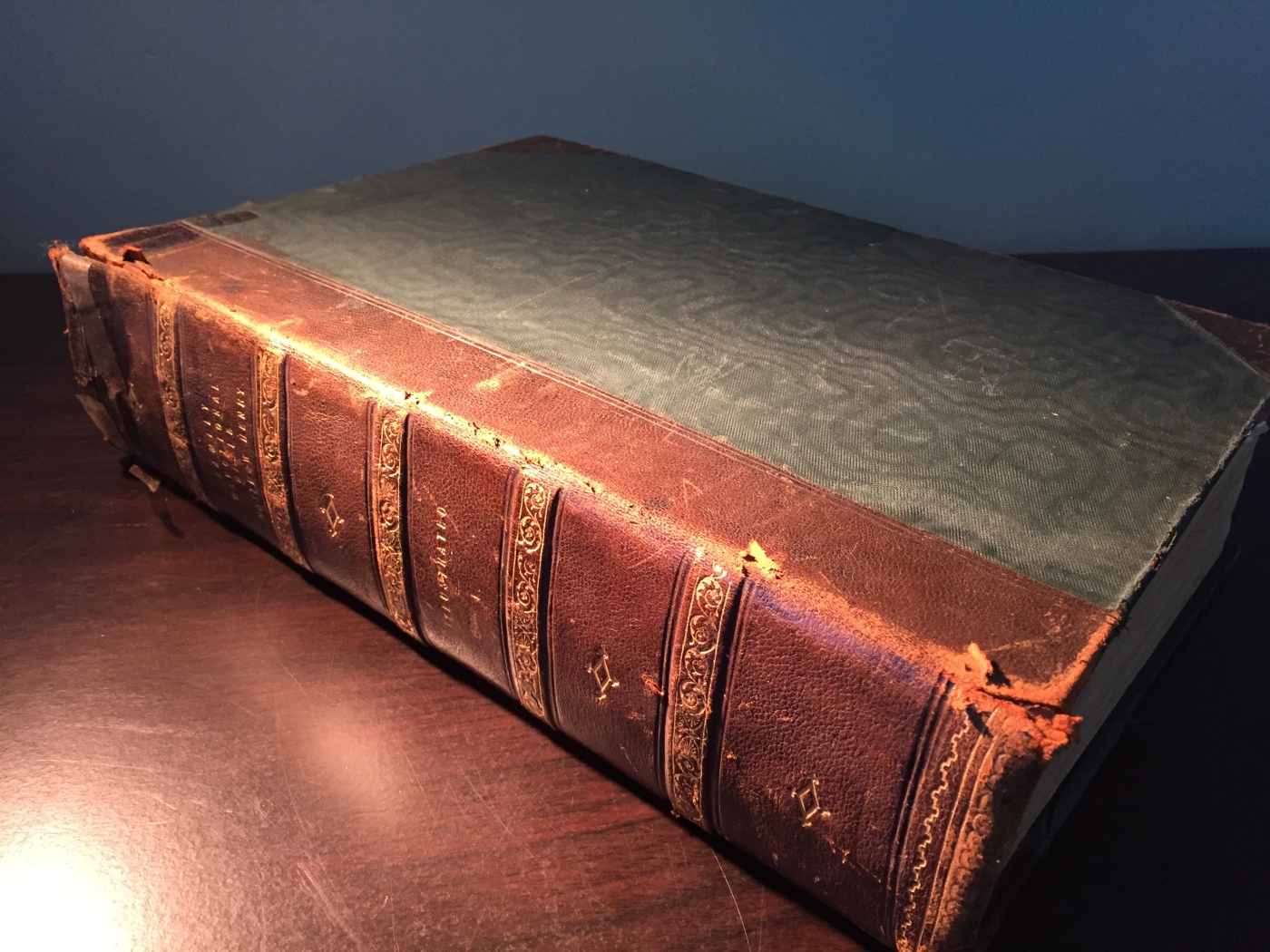 Personal objects can often be overlooked when conducting family research. It may be that they are seen as merely possessions, however objects can provide us with rich and invaluable information and stories.

While consulting a well-crafted genealogy publication, concerning the Holgate family, I observed an interesting note. On the pages that were of interest to me at the time (those detailing members of the Brown, Whittington, Noakes and Alchin families) there was a small note at the bottom crediting the information provided upon those pages to a bible that was, at the time the author put the book together, in the possession of Isabell Alchin (nee Whittington).

Isabell Alchin was my Nanna, and when she died in 1996 the contents of her home, in Jobson Street Dalton, were sorted, moved into storage or dispersed among family. It was possible then that the bible, mentioned in the Holgate book, was traceable. As it turns out, I did not need to look far, and the bible was found on a shelf at my mother’s house, in plain view but unopened for many years.

The Illustrated Family Devotional Bible by Matthew Henry is not an insignificant tome. It is 35cm in length, 24cm in width, 7.5cm think and weighs 4 kilograms. The front insert reveals the origins of the book and points to a larger story. The hand-written dedication is dated 19 October 1884 and reads: ‘

‘John Charles Brown
his book a gift
from his father the
best best book out
to read.’

John Charles Brown apparently received the bible as a gift from his father who was William Brown. William was the brother of the locally well known ‘Old Tom Brown’, of Methodist fame, and of whom many stories have been written (including ‘Old Tom Brown: of Wesley Vales Dalton’ printed by the Federal Capital Press 1938).

William and wife Susannah immigrated to Australia in April 1838 on board the same ship as his brother Tom, and their families, the Duchess of Northumberland. During the voyage William and Susannah lost their seven-month-old son. After arriving in Sydney, they lived at Cobbitty with brother Tom. It is in Cobbitty that Tom would hone his lay-preaching skills under a fruit tree in the paddock of his bother William. While here William and Susannah started expanding their family. One of the children born at Cobbitty was John Charles Brown, sometimes referred to as ‘Charlie Brown’ in 1843. Around 1845, the two senior Brown brothers, William and Old Tom, along with their wives and children (as well as Tom’s mentor John Wheatley) all pack up and move south. Old Tom heads to Oolong Creek, Dalton. In Rhonda Preston’s Bevendale publication, William and Susannah are noted as having first resided at ‘Burronong’, near Gunning before moving to Dalton. In Dalton, their son, John Charles Brown, married Maria Wheatley in 1867. John Charles and Maria move to Bevendale where they call their home ‘Fairview’.

A unique feature of these Family Devotional Bibles is the family ledger page at the beginning of the book, where family names, births and marriages can be recorded by the owner. This ledger has been both an invaluable source of information, as well as a confusing one. Recorded upon the ledger within this book are the names of six children, supposedly those of John and Maria, however it is known and recorded that together they had only five. Samuel Charles Brown is the sixth recorded child, born in 1899 at ‘Pearl Bay’ (which I am told is where the old tennis courts use to be, near the Bevendale Church). This would have put Maria into her 50’s when conceiving the child which, in those days (and these) is rare indeed. State records suggest that Samuel Brown (who never married) was born to Maria’s daughter, Eliza, out of wedlock. The fathers name does not appear on the record. Eliza married Sam Martin four years later, they had one child together, Marcella. It would appear that John Charles and Maria took over care for Samuel, perhaps to ‘preserve’ their daughter’s reputation, it a time of quick judgement or perhaps as Eliza did not have the means to care for him herself? Perhaps the records kept have just been confused or poorly kept. Little is known.

As well as this family ledger providing many leads and some red herrings, contained within the pages of the bible was a collection of news clippings, letters and postcards relating to various people who once had possession of the book (as well as a copy of the first edition of the renamed Gunning Gazette, 1926). Correspondence between Samuel and his (half)sister was particularly interesting and full of rivalry (some things never change). Most of these items would have been pressed, within the pages of the book, by Samuel himself, who had the book in his possession after his grandfather (and surrogate father), John Charles, passed on. I am still working on making sense of these many gems of information.

This book has another story; how did it come into the possession of Isabell Alchin (nee Whittington), who continued to add items and information to its many pages?

After retiring from service during the second world war, and in the immediate post-war years, Fred Alchin worked and lived with his wife (Isabell) and young family on Noel Dowling’s ‘Bloomfield’ at Blakney Creek. For several years they lived in the small cottage alongside the main homestead. When work on the property dried up, Fred and Isabell, now with three young children, moved into Myrtle Cottage on the Friend family farm, outside Dalton and neighbouring Tom Browns original selection. Fred found work on the railway as was common in this period. In 1970 the Alchin family, with very little money on hand, were made an offer that would give them an opportunity to own a home. Samuel Brown (as discussed above) had recently suffered a stroke. He was living alone in his Jobson Street house in Dalton which he had originally purchased with his uncle, Spencer. Both men were bachelors and lived together until Spencer’s death in 1959. Samuel needed full time care after the stroke and called on Isabell Alchin (who was his 1st cousin, once removed). Samuel made Isabell the often that; if she were to care for him, full time in his home, she could move her family into the house, rent free, and would be left the house as an inheritance after his death. Isabell agreed and the family moved in, cared for Samuel, and were left the house when he died in 1975 (5 years after moving in). Samuel’s possessions were also left to Isabell and included furniture, books, family portraits and (among other things) William Brown’s bible.

The family history information, scribbled, scribed and pasted inside this bible has been invaluable to my research. I’m sure the contents of the bible itself were also well read and cherished by some of those who have had it in their possession. The bible still poses a few questions that I am yet to answer, namely; was the bible a family heirloom, brought across with William Brown on his immigration to Australia, or was it purchased here, much later as a gift for his son?  Who hand-wrote the dedication in the book and dated it ’19th October 1884′? William Brown had died by this time but John was still living. It seems unlikely that John would write about himself in third person like this, but perhaps not. Also, why 1884?

Another broader question has been raised during my thinking on this item…where exactly is William and Susannah buried? Considering how well documented his brother, Tom Brown’s, life has been, it is surprising that I have not yet discovered their definite resting place. Some records place the couple at the ‘Wesleyan Section’ of the Dalton cemetery, but if they are here, either in the general cemetery or behind the Uniting Church in town, there exists no record or marker of their burial spot. I hope that the bible will continue to be cherished for a long time to come, and that it keeps revealing its secrets.

References and sources:
‘The Illustrated history of Methodism : Australia, 1812 to 1855, New South Wales and Polynesia, 1856 to 1902’ by James Colwell
‘The Bevendale Settlers’ by Rhonda Preston
Holgate family history publication by Daphne Holgate
‘The Family Devotional Bible’ by Rev. Matthew Henry. The London Printing and Publishing Company, London and New York.

See Brown family tree on this website for more.